Australian microphone maker Røde has branched out into iPhone filming accessories, with the launch of the Rødegrip.

The company already makes a number of iPhone oriented accessories, including the iXY, a plug-in, stereo mic, and the SmartLav, a low-cost lavallier mic, again designed for smartphones. The company also recently launched the Micon 11, an adapter for its full-sized lavallier and headset mics, to allow them to work with iPhones.

The Rødegrip, though, is a more radical departure. It is a mounting accessory that doubles as a pistol grip for the iPhone – so it can be used as a standalone audio recorder, or in place of a shotgun mic and grip – and an on-camera mount.

The grip can be used to attach an iPhone to a boom pole, for use with the iXY mic, or, with the same attachment, to connect the iPhone to a DSLR or other camera as a second audio recorder.

But the grip can also be turned around, to make an iPhone video grip, or even a desktop mount for video calls or filming.

Røde also makes a second kit, the Rødegrip+, which comes with a set of three photographic lenses that screw to the grip, adding telephoto, fisheye and macro to the iPhone 4 or iPhone 4S.

For both options, the grip folds down flat, for easy storage. Video makers can also add the SC2 patch cable, to connect the iPhone’s headphone socket to a camera’s minijack input, for recording scratch audio. A version for the iPhone 5/5c/5s is in the works, Røde says.

The manufacturer has produced a promo video which shows the grip in action: 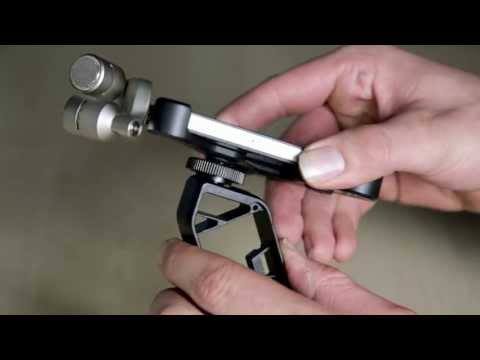 The Nikon D610 is the company’s new, entry-level full-frame DSLR. But how does it measure up when it comes to sound? We put it to the test. […]