Audio equipment maker Zoom has added a new, hand portable six-input recorder to its line up.

The H6 includes four external mic inputs as standard, in the shape of XLR/TRS jacks, allowing recording of up to four channels. But the Zoom can be expanded, by adding modular mic interfaces, to a six channel unit. The recorder can work as a six input, two output USB audio interface.

The main recording specs are similar to previous Zoom recorders, with up to 24-bit recording at 96kHz, including BWAV, and support for memory cards with capacities of up to 128GB. Metering is via a colour LCD screen which adapts, depending on the mics un use; audio input levels are set using rotary dials, each with its own pad. The H6 can provide phantom power.

But the most interesting feature of the H6 is the modular mic/interface system.

As well as its internal inputs, the H6 can be expanded with a range of additional microphones and inputs. It comes with an XY mic and mid-side mic, but Zoom has also announced two additional clip on units: a secondary pair of XLR inputs, and a shotgun mic.

And, in a nod to Zoom recorders’ existing popularity with video makers, Zoom will also sell a hotshoe adapter for attaching the recorder to a DSLR or camcorder; a line-out can provide audio directly to a video camera.

The UK price for the recorder is expected to be around £350 when it goes on sale in July.

The manufacturer’s demo video below is below. 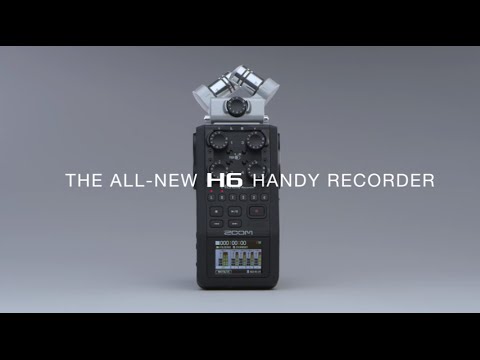 Rotolight, the specialist in LED-based lighting, has branched out into audio with its first microphone. The Roto-Mic is an on-camera, short shotgun design, aimed at the DSLR and small video camera market. The mic has […]

Audio gear can add significantly to the cost of a filming rig; perhaps as much as 25 per cent of a budget can go on audio. None the less, there is a lot of mileage […]

New series: We help readers with their equipment choices. […]