When Apple first released Final Cut Pro X about 18 months ago, the reaction from video producers and editors was, to say the least, mixed. 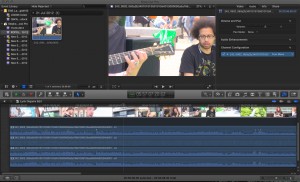 FCP X marked a radical departure from Final Cut Pro 7 and its associated suite of applications. And the new version dropped features – and workflows – many video editors considered essential.

Since then, though, Apple has released no fewer than six updates to the application. The fact that they are point–point releases (the latest version, reviewed here, is 10.0.6) is deceptive. Each new version has added significant features to the programme, and with it, brought it closer to the application that Apple’s developers had, perhaps, originally thought of.

Sticking to a programme of relatively small, and free, releases is a useful strategy, too, as it puts those additional features in the hands of editors much more quickly than if Apple kept to a conventional release schedule. And it also allows Apple to tweak the interface.

The latest version, 10.0.6 builds on this by adding a “dual viewer” display to make it easier to compare clips, especially for colour work, and the ability to view, and edit, multi-channel audio directly on the timeline.

Multi-channel audio on the timeline is a massive improvement for critical audio editing tasks. Although FCP 7 supported multiple audio tracks, the way FCP X handled this almost forced editors to carry out all but the simplest audio work in another application, such as Logic or Pro Tools.

The dual viewer option is another feature that really should have been in FCP X earlier; now it is here, it makes tasks such as matching action or camera angles a lot simpler and intuitive. The most significant improvements, though, are really for grading and colouring: both views can show scopes. FCP X is still a long way from a dedicated colouring application, but it really is much, much easier to work with a side by side comparison of two clips.The sample clips in the screen grabs here, for example, are from one of the new generation of Sony camcorders, with four audio channels. In this case, a video of a live performance, the external mic was set to a slightly higher level and the internal mics to a “safety” level in case of peaking. Working on the footage in earlier versions of FCP X would, in effect, have forced an editor to pick either the internal, or external mics.

Editors can now also paste attributes or changes from one clip to others, which is handy, for example, if several clips need the same corruption or adjustment.Apple has also added some other, useful interface changes. These include a range selection that keeps start and end points on clips in the Event Browser – again quite a simple change, but one that greatly speeds up work on projects with lots of smaller clips.

Other improvements include adding chapter markers – for DVD or BluRay authoring – and a tidier interface for importing media; media on memory cards or cameras now appears in the same window as media on drives or shared storage. For high-end users, Apple has added REDCODE RAW editing, but also a plug-in for MXF files, as used by Canon camcorders.

Testing the software both on an original Mac Pro – an old model but with a powerful graphics card – and on a MacBook Pro, again with a dedicated GPU – suggests that the performance improvements are noticeable for certain tasks, especially importing and rendering clips.In our tests, though, it was the performance improvements that surprised the most. Apple says that FCP X now uses the GPU for background rendering.

Overall, the system felt snappier too, and, from the clips we tested, automatic audio sync seemed to work better too. FCP X is perhaps not yet at the level of maturity, or have quite all the features, of FCP 7, and in some areas it is still a long way short of Adobe’s, admittedly more expensive, Premiere Pro. But as a low-cost, but still powerful, editing application FCP X is increasingly useable. Apple seems to be on the right track.

The Amira: an Arri documentary camera

Live streaming with the Panasonic GH4

Video: We test out live streaming using the GH4 and the YAGH adapter […]