Each year, Audio Video Pro highlights the equipment and technologies that, in the entirely fallible opinion of the editor, made the greatest contribution to our industry.

For 2014, we are announcing two awards: Best Camera, and Best Technology.

The stand-out technology for us this year was Canon’s Dual Pixel CMOS Autofocus.

Fortunately easier to use than to say, the technology (DAF for short) brings far more accurate focusing and focus tracking in to camcorders and DSLRs in video mode, than anything that has come before. 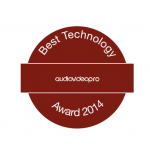 Canon’s DAF works by taking additional information from the image sensor and working with conventional, contrast detection AF, not just to nail focus more quickly and accurately, but also to create a smooth transition between in and out of focus.

The first camera to feature Canon’s DAF was the EOS 70D, with its touch-screen and virtual rack focus. But the system quickly migrated to the C100 camcorder, which we reviewed here, and the C300, and the new 7D mkII. An upgrade to the C100 and C300, DAF will be standard equipment on the soon-to-be released C100 mkII.

Of course, the technology is by no means infallible, and limitations such as a single focus point on the C100 mean it won’t work in every set up. But, as a way of bringing AF technology in line with the needs of video cameras — and even convincing film makers who swore they would never use AF — Canon’s dual-pixel CMOS autofocus is a worthy winner of this year’s Technology award.

Choosing a best camera out of this year’s releases was always going to be a hard task. For this award, though, we set two criteria: the camera had to be ground breaking, and it had to be readily available to film makers. This ruled out a number of innovative designs, including the AJA CION, the Blackmagic Design URSA, and the Canon C100 mk II. 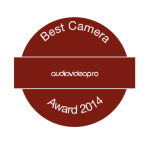 But that left plenty of choice: the Sony FS-7, the GoPro Hero 4, Panasonic’s Varicam 35 and the 7D mk II are not yet shipping in quantity, but they made it under the wire. Our decision, though, was to pick a camera announced at the beginning of the year: the Panasonic GH4.

The Panasonic succeeds in combining the features needed by pro videographers and broadcasters, as we said in this analysis article on the GH4 here, with a robust and easy to use design, great image quality, and an affordable price. The fact that the camera records 4K internally — and can produce 12-bit 4K with an external recorder — makes it the best camera currently on the market, in terms of price/performance.

The GH4’s only real rival for us, this year was the costlier Sony a7s. The a7s has its plusses, including a full-frame sensor, incredible low-light performance, and arguably a better choice of lenses for film making. But the GH4’s internal 4K, including “proper” Cinema 4K at 24fps, pushed it to the fore. The Panasonic Lumix GH4, then, is Audio Video Pro’s Best Camera of 2014.