Canon’s 5D Mark II has done more to change video production, and even film making, than perhaps any other device to come to market in the last few years.

Canon’s DSLR was not the first to support video – that honour goes to Nikon’s D90 – but it was the first to turn the DSLR into a practical video making tool. Documentary makers, in particular, were attracted to the camera’s full-frame sensor, and Canon’s excellent lenses. 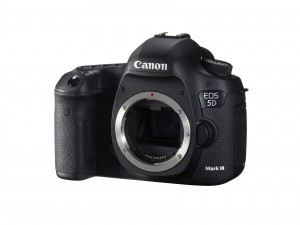 The 5D Mark II does have its drawbacks, though, particularly a short recording time, limitations in audio recording, and no “clean” HDMI out. The Mark III sets out to fix most of these issues.

For stills photographers, the main improvements in the Mark III are a 22.3 megapixel sensor (slightly larger than the older model), improved autofocus and an improved, 5fps continuous shooting mode. Low light performance should be better than the MkII for video and stills.

For video journalists, the changes are also evolutionary, but could be significant.

For reporting and documentary film making, the changes to the way the 5D Mark III handles audio stand out. In keeping with Nikon’s D800 and D4 DSLRs, Canon has added a headphone socket for audio monitoring, along with fully adjustable sound levels. Depending on the quality of Canon’s audio preamps, this could make “single system sound” possible on the camera.

For video, Canon has introduced SMTPE time code – very useful for synching up footage from different cameras at the editing stage and more reliable than using the standard timings from the camera’s internal clock – although there is no socket for an external time-code input, for connecting to a time code generator, audio recorder or another camera.

Canon has also added a new choice of compression methods for the video. Film makers can now pick either IPB or ALL-I compression, although the files are still recorded as H.264. ALL-I is an intraframe-based compression (see Canon’s spec sheets for full details). ALL-I creates larger files but they will retain their quality better in editing. Canon has, though, kept to the FAT32 file format for recording video; this limits clips to 4GB, but the camera will create a new file until it reaches 29m59s. These files should play back as one video clip in an editor (but not in the camera). It remains to be seen how well this works in practice, as some other cameras that split clips can suffer from lost frames. The MkIII can record to both its CF and SD cards at the same time, a useful safety measure.

The main feature that Canon have not added is a “clean” HDMI out. A full-resolution HDMI output bypasses the camera’s internal compression and allows recording to external media (or use of the camera with a suitable vision mixer). External recorders are not cheap, but give the option of recording directly into formats such as Apple’s ProRes, for immediate editing. But the Canon’s output is not “clean” – ie it includes camera data – and it is limited to 720p, not full resolution. This is an area where the Nikon D800 seems to have the edge.

So is the 5D Mark III a worthwhile upgrade? For 5D Mark II users, it will depend on how much the limitations of the current camera bother them. For some video journalists, the longer recording time will be enough to convince them to move. And there are enough other features to keep Canon fans happy.

For new users, though, the choice between Nikon and Canon is not as easy. Canon is looking for £2999 (including VAT) for the 5D Mark III, body only; the Nikon D800 comes in at £2399 (also including VAT). Neither are cheap options. It will be interesting to see what both cameras are capable of, in terms of video quality, in real-world situations.

Meanwhile, Canon’s promo video for the new camera is on YouTube: