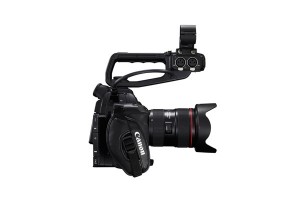 The EOS C100 is based around a Super 35mm sensor, rated at 8.3 megapixels, with a resolution of 1920×1080 for full HD. The camera is similar in appearance to its higher-end siblings, the C300 and C500, but with a few important tweaks. The LCD screen, for example, is built in to the body, but the XLR audio inputs remain a separate unit.

Internally, the most significant change is that the C100 records video in the AVCHD format, on SD cards, at up to 24mbps. This suggests that Canon sees the C100 as a direct competitor to Panasonic’s AF100/101 and Sony’s FS-100, both interchangeable lens, large sensor cameras that record in AVCHD. The C100 records uncompressed video via HDMI, although there are no SDI outputs.

But the C100 offers more than just a C300 with a different codec. Announcing the camera, Canon emphasised the camera’s automatic functions. The C300, for example, has no auto focus; the C100 has a “one shot AF” button for confirming focus, as well as auto iris and auto white balance options. This, the manufacturer suggests, makes it more suitable for one-person operation. According to the spec sheet, the C100 also has a built-in neutral density filter, up to six stops.

Canon’s C300 has already found its way on to a number of documentary shoots, and the C100’s automation, and lower cost, can only increase the range’s appeal. The camera would, for example, make a good step up for journalists or photojournalists who already use Canon EOS cameras – and have EF lenses – but want a body that is optimised for video.

However, the camera’s AVCHD recording format is not currently suitable for HD broadcast, so anyone planning to put footage from the C100 on air would need to invest in a separate, external HDMI recorder.

The Amira: an Arri documentary camera