A camera for video journalism? 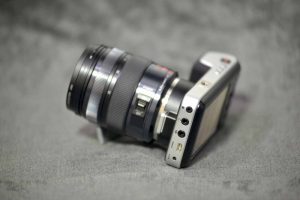 The Blackmagic Pocket Cinema Camera is not a camera for a videojournalist – at least, not if it is their only camera.

It has too many limitations and restrictions, even though it is a remarkable camera for the price.

A videojournalist on a budget would be better served by a mid-range DSLR such as the Nikon D5300, which boasts remarkable video quality for the price, by a high-end consumer camera, or even an iPhone. These may not be the creative options, but they will deliver more shots, more of the time.

As a second camera, or a camera for more creative shots, the Pocket Cinema Camera looks rather more interesting. Its small size here really comes into its own: it can be slipped into a spare compartment in a camera bag, and rigged up on a lightweight support such as a Noga arm or Gorillapod. As it uses M43 lenses, it is a very interesting option for anyone who has bought into the Micro Four Thirds system, with a Panasonic AF101 or GH2 or GH3.

It’s a shame there is no wireless remote control – this would make it a useful second camera for interviews — but Lanc controllers are cheap enough.

The requirement to grade footage might be a limit, when it comes to the Pocket Cinema Camera for, say, the interviewer shots in a two-person interview, or for work that requires quick turnaround. But for a second camera on the main interviewee, documentary-style, the ability to capture a wide dynamic range shot for later processing is a useful tool, especially in set-ups where lighting might challenge a DSLR.

Then there are the relatively large file sizes of even ProRes footage, the inability to format memory cards in camera, and fairly short battery life. Our view is that the Pocket Cinema Camera can be used for factual work, by an experienced PD or in a team with a good editor, but not for quick turnaround news.

Next: A camera for creative film making

We test out the video quality of Nikon’s Coolpix 7800 by taking it on location. […]