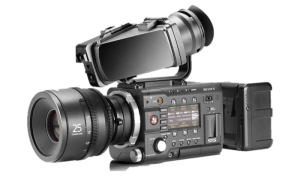 Sony will add two new large-sensor cameras to its “Cinealta” range from next February.

The new cameras –the F5 and the F55 will sit between the manufacturer’s current F3, Super35mm camcorder and the high-end F65. Both new cameras will have 50mbps recording and support 4K resolutions. The top of the line F65 will receive a firmware upgrade to support 8K.

Sony describes the F5 as the “next generation” F3, with a modular design, PL lens mounts, 4K recording and 50mbps 4:2:2 for HD broadcast. The viewfinder is now an OLED model, and the F5 can record at up to 120fps for slow motion. 4K recording will be via an external recording unit. The F55 is a higher-end model that supports internal 4K recording, and an electronic global shutter.

Sony has also announced a new recording codec, XAVC, which it says “bridges the gap” between RAW recording, as on the F65, and conventional HD recording. The company has said that the format will be supported on both its professional and its consumer camera lines (we will look at this codec in more detail when sample footage is available).

And Sony has confirmed that its external 4K recorder for the FS-700 camera will be available between April and June next year. There is, though, as yet no information on pricing for the HXR-IFR5 upgrade, or the new cameras.

Sony’s F3 has already proved popular with documentary makers, and the F5 provides a useful upgrade with native 50mbps 4:2:2. But by adding 4K capabilities, the camera competes with both Canon’s C300 and C500 models.